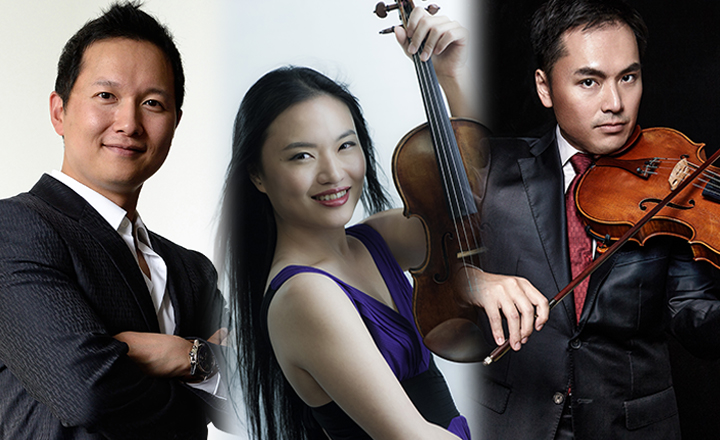 THE SHOW: Cindy, Andy, and Wonny – violin, viola, and piano – show us a different way to make music together.

As solo recitalist and chamber musician, violinist Tien-Hsin Cindy Wu performs regularly in Asia, Europe and North America at Carnegie Hall, Alice Tully Hall, the Metropolitan Museum of Art, Kennedy Center, and Library of Congress. She has collaborated with luminaries such as Gary Graffman, Kim Kashkashian, Ani/Ida Kavafian, Ralph Kirshbaum, and members of the Alban Berg, Brentano, Guarneri, and Tokyo string quartets. She is artistic partner with the Da Camera Society.

Praised by The Strad “The great Molto adagio…elicited some of the night’s most sensitive work, especially from Wei-Yang Andy Lin on viola.” Born in Taiwan, he is artistic director and co-founder of the New Asia Chamber Music Society. Andy has won numerous competitions including Taiwan National Viola Competition and First Prize in the 2008 Juilliard Viola Concerto Competition. He made his Lincoln Center solo debut with the Juilliard Orchestra.

Wonny Song, piano is artistic & executive director of Orford Music (Quebec) and Mooredale Concerts. A student of Anton Kuerti, he is widely praised through his recitals, concerto appearances, and recordings for a wonderfully poetic touch and depth of musical insight. Equally at home with chamber music repertoire, he has appeared at the Montreal, Lachine, and Seattle Chamber Music Festivals as well as the Young Concert Artists Festival (Tokyo).

They will perform excerpts from Schumann, Handel, and more!