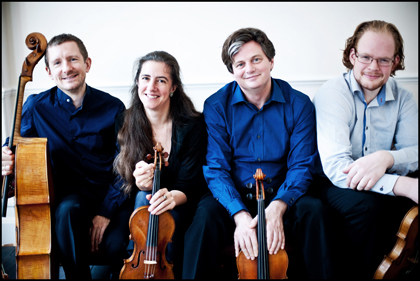 Considered by many to be supreme, England’s London Haydn Quartet was born out of a passion for the composer. Formed in 2001, they strive to emulate pure 19th Century sound through their use of gut strings and classical bows. Adding to their uniqueness, they collaborate regularly with clarinetist Eric Hoeprich with whom they recorded the Brahms and Mozart quintets on the Glossa label. As a quintet, they have performed at the Concertgebouw, the Library of Congress, Yale University as well as appearances in Switzerland, France, Germany and Czech Republic.

American Eric Hoeprich has specialized in performing on historical clarinets. He has performed as a soloist with early music conductors such as Sir Roger Norrington and Christopher Hogwood.

“The musicians imbued both works with myriad details of shading and contrast, and beautifully calibrated phrasing.” – New York Times

“Gut strings sometimes mean sour intonation, but not with this superb British group…they explore…repertoire with a light touch and kaleidoscopic colours…crammed with subtle pleasures.” – CD Review, The Times