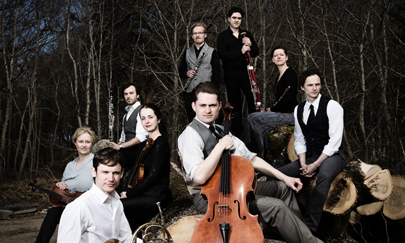 Coming to us from Denmark – young, ambitious, dedicated, and making their Canadian debut. Founded in 2002, Ensemble MidtVest consists of a string quartet, a wind quintet, and a pianist!

The Ensemble is renowned for creative programming and pushing the boundaries of traditional classical concert form. These eleven players are European classically trained musicians, all of whom specialize in chamber music. Together they form and reform into dynamic ensembles with the ability to play at highest levels a wide range of music. They made their Carnegie Hall debut in 2012.

They hold their own an annual chamber music festival at the manor Nørre Vosborg on the Danish West coast.

Their 2006 recording of piano quartets by Mozart and Brahms was awarded best chamber music CD by listeners of the Danish Broadcasting Company. The group has toured Italy, Sweden, Germany, and Norway.

“…you felt as though you’d been on a journey that transformed the material even as you revisited it…in conjunction with the ensemble’s eloquent pianist, Martin Qvist Hansen, the cellist, Jonathan Slaatto, dominated the sound…plucking at the very top of the fingerboard for a brilliantly muted, curt effect…the group played with a modesty, even a reticence, that would, periodically, suddenly and beautifully explode.” – New York Times 2014