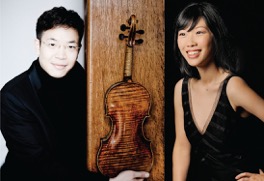 His upcoming engagements include debuts with the Houston, Pacific, and Seoul Philharmonia, and returns with the Detroit, Alabama, Bilbao, and National Symphonies of Mexico and Taiwan. He plays on the 1742 ex-Wieniawski Guarneri del Gesù on loan through the generous efforts of the Stradivari Society of Chicago.

Together, they will perform a powerhouse program that includes Saint-Saens Violin Sonata No. 1 in D minor, Op. 75, Sarasate’s Spanish Dances, Op. 22 Romanza Andaluza, and Cyril Scott’s Lotus Land arranged by Fritz Kreisler. And there is more! Canadian debut.